Solar energy is the most abundant renewable energy source we have on earth.

The solar panels produce a DC voltage that is further connected to a power inverter. The inverter changes the direct current (DC) to alternating current (AC). The inverter’s AC side is connected to the main power cabinet of the consumer. This way the user can use the generated solar energy.

During the night or when the user’s demand exceeds the amount of solar energy generated, this lack of energy is provided by the utility. In case no power is supplied by the utility during the day, it is also necessary that the inverter stops functioning. This will prevent the tension in the utility’s network from rising.

When installing an on-grid solar power system, the user may see a significant difference in his energybill. 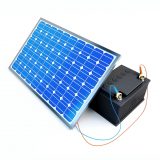 Sign up to our Business App & see our promotions.